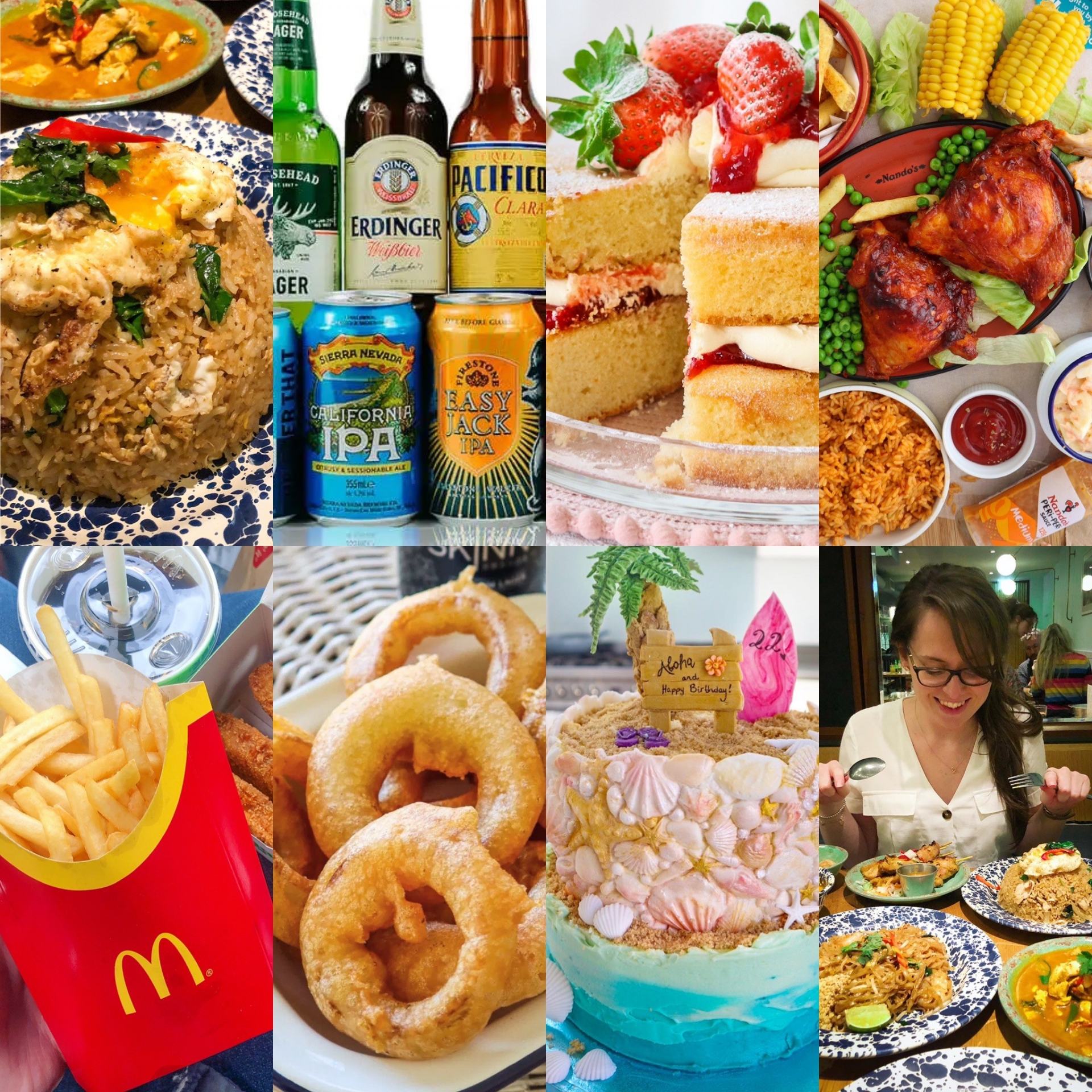 Here’s PART 1 of “What are gluten free people thinking?”

It’s a collection of thoughts from fellow gluten freers. It’s here to either help you with answers to those thoughts or just to show you that everything your thinking, someone else is thinking too. You’re not alone!

I wish there were more grab-and-go options for lunch

I’m so with you on this one! Luckily I don’t have to do it often, put I recently put together a gluten free on-the-go guide and was surprised at how few places had options. Have a look there though – might be something new for you!

Hear you on that too. KFC and Burger King are absolute no go’s but Mcdonald’s is pretty good – have a look at my Mcdonald’s guide here.

I think this is one of the hardest things about being coeliac. Please know you are not alone in thinking that!!! Have a little read of my “Tips for Eating Out Gluten Free: ‘how to make it easy”… although I think that should say *easier* because unless you’re eating in a 100% gf restaurant, its always a bit tricky x

Restaurants that say they’re gf but I’m not convinced

Ask all the questions you need to ask and if you’re not happy, be comfortable enough to say you want to eat somewhere else. Your health is your number 1 priority.

The most recent source of my annoyance is restaurants that have a gluten free menu, but then you still need to have a look at their allergen folder because some of their gluten free menu isn’t coeliac safe. The Lounges… I’m looking at you!!!!

Its hard to eat somewhere new

It is really hard. You are trusting someone with your health and that’s never going to be easy.

A couple of place for you to find some confidence: (1) there’s lots of Coeliac fb groups in local areas where you could ask everyone if they’ve been there and how it went (2) trip advisor – search for the restaurant and see if they’ve got any gf reviews (3) ask me! If I’ve been there, I’ll let you know what I thought and if I haven’t, I’ll put it in my stories and find someone that has!

Going to the pub is hard when they spill beer everywhere

This is one I haven’t really thought about! If you’re drinking from a fresh bottle and have a clean glass, you shouldn’t be consuming any gluten so don’t worry too much. I’ve got an alcohol guide here to help you pick a safe drink

Starting to get used to it, nervous about holidays

DEALING WITH OTHER PEOPLE

Ok so this is how I deal with it… I’m never going to make them eat gluten free as that’s not fair and I’d feel terrible! But, there’s no way I’m missing out either!! Make/buy something similar to what they’ve got but gf. And be happy that no one will want yours (even though ours is often just as good…shh!!) so you get a bigger portion!!

There’s no need for you to leave the room – you might not be able to join in the cooking but sit in the same room and join in the chat.

Could you explain how you feel too and then ask if they’d make a gluten free version of whatever they’re cooking with you once they’re done?

Mannnn… either (1) you organise a night out and make it somewhere you can eat (2) tell your friends that you’re happy to come along and not eat, so you can still join in

People just don’t get it. People think im being awkward and i’ll be fine with a little bit

The first thing to remember is there probably was a time when you didn’t know what coeliac disease was too so don’t be frustrated/fed up/etc when they’ve never heard of it before. So hard, I know!!

Keep the explanation simple. I usually go with something like “it means I can’t even have a crumb of gluten. If I do, my body attacks itself and causes damage to my stomach which makes me really sick immediately but also causes long term complications”.

Second thing, if you’ve encountered one of those horrible people who make rude comments, I tend to try and explain what coeliac disease is once and then if they do it again, just let it go! It’s not worth your energy. I think: “they’re just lucky they don’t understand”. Again, so hard to do but sometimes there’s just no changing people!!!!! And take comfort in the fact you’re not alone.

God this is horrible isn’t it. When someone else is cooking for me and I’m a bit nervous about what’s going on, I say: “I know you know this, but can I just check….” and then add whatever I can see they’re about to do e.g. “…you’re not using the same knife to cut my bread as you have the gluten bread.”

Ultimately, its your health and your the one who is going to be ill if they don’t do it correctly so don’t feel bad. It’s better to have that awkward conversation whilst they’re cooking than be ill afterwards… maybe even in their bathroom!!!!

As the daughter of a coffee shop owner, my guess would be its because they haven’t got the time/kitchen space to prep loads of combinations of allergy free meals on top of all the regular menu. I know that can be annoying though – and hopefully one day people will realise how easy it is to make the “regular” meals gluten free anyway, without any compromise on taste!

I always find this one weird too. It only has to list the ingredients when there’s an allergen involved. Have a little look at my Alcohol Guide here.

Is it going to affect my daughters quality of life

My heart went straight out to you when I read this one. I can only imagine the worry. There’s going to be really, really tough bits… from school parties and sleepovers to dinner dates and office lunches… but I promise it doesn’t reduce the quality of my life. If anything, its just shown me who are the good people in my life that will try to understand what it means to be “coeliac” and help where they can and filter out the rest 😉 !!! I was only diagnosed at 27 but by 29, its already become completely second nature and I can’t remember what life was like without it. And even in that time, I feel like there’s been a significant increase in awareness which makes it so much easier.

If I was diagnosed as a child, I would have liked to know another child with the same thing so I had someone I could feel similar to. Maybe reach out to people on your local Coeliac fb group?

Why am I developing more intolerances

One for your doc! Just speaking from experience, when I cut out gluten, I began to heavily rely on foods that didn’t feature very often in my diet before…chickpeas, lentils, corn, etc. That hurt my tum, so I stripped my diet back to the foods I had pre-diagnosis – lots of veg, meat, fish, rice (all naturally gf anyway) and it helped.

I think everyone gets a bit bored of meals sometimes, gluten free or not. I don’t think you’re bored of gluten free food. We can find substitutes for almost everything these days. What would you have if you wasn’t gluten free?

Labelling is annoying – why cant it be clearer

Coeliac UK are trying to help. It’s why they’ve removed all items with barley malt vinegar from their scanner app. Barley malt vinegar is always coeliac safe due to the distillation process but because its in bold on ingredients lists, it can confuse people., Coeliac UK want to the manufactures to add a “gluten free label” to the packaging and until they do, they refuse to add the item to their app.

Why is gf shrinking to allow room for vegan

I second that one too.

I feel like this is one of the real bummers about having coeliac disease. It’s one you can’t really fix so I feel like I just have to accept it and know I’m not alone in that. 1/100 people are coeliac remember.

Shall we end on some positives…

LOADS of you have specific requests from “I want some good doughnuts” to “I need gluten free croissants”. The answers are coming in PART 2!

Along with help for the people who are frustrated at the lack of substitutes… we have to solve that!! “I like trying new things but get disappointed when they’re not as good as the original.”… “I’m sick of it – the alternative just aren’t good enough.”… “I always want what we cant have.” WATCH THIS SPACE!!!!